Last week, we went on a guided tour of some of Spitalfields  ..... an area { for those who are not familiar with London } of the East End of London. The name derives from St Mary Spital, a Priory/hospital { a lodging for travellers run by a religious order } on the east side of Bishopsgate. The area was covered with fields and nursery gardens until late in the 17th century when streets were laid out for Irish and Huguenot silk weavers.

As you exit Liverpool Street station, the modern buildings tower above you, interspersed with the old.

This was John, our tour guide. I wouldn't say he was the most informative but a nice guy. 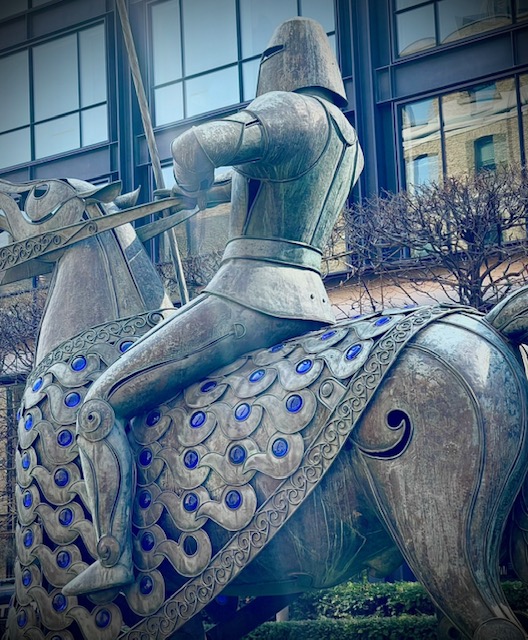 First stop, Devonshire Square, Bishopsgate. The statue of the knight represents on of the 13 nobles, { the Cnihtengild } who were granted land around Bishopsgate in the 10th century.
Coffee ?
I took this photograph in Devonshire Square as The Gerkin was reflected in the windows but, looking all around, you couldn't see The Gerkin anywhere ..... it was weird !
This is the oldest London shopfront, built in 1756.
The Jewish soup kitchen, Brune Street ..... an institution deeply embedded in the community. It was founded in 1854 to supply soup, bread and meat twice a week to poor members of the Jewish community. It closed in 1992 serving soup to the poor up until that date.
Christ Church ..... An Anglican church, built by Nicholas Hawksmoor in 1714 mostly for the Huguenots who dominated the area.

I love these shuttered houses .... when they were built in the 17th century, they were aimed towards working Londoners and migrants, particularly the Huguenots who had been fleeing religious persecution in France in the 1680's. Now, they sell for millions ! 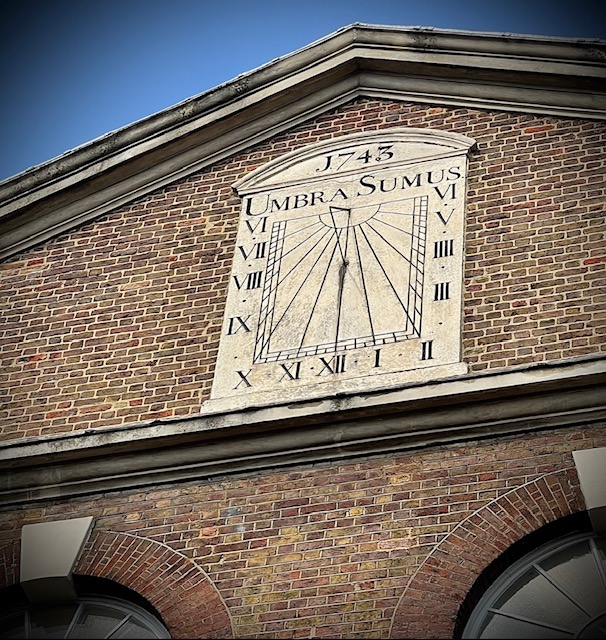 This sundial in Brick Lane dates from 1743. It was built as a chapel and has been many things over the years and is now a Mosque. ' Umbra Sumus ' which translates to ' We are Shadows'.
Finally { I can hear you all breathe a sigh of relief !!! } my favourite house. No. 4 Princelet Street. I love the shabby, pink facade and shutters. It isn't a home anymore but is rented out for events and a filming location. I've seen it in many period dramas.
There is so much more in Spitalfields, including Dennis Severs house which I have been to many times and one of my favourite places to visit and I have posted about it before but, it would make too long a post to talk about all of Spitalfields. Oh, and Tracey Emin lived in Spitalfields and only recently moved away ..... just to give you an idea of how much the houses go for, she sold hers for £12 million !
Hope this post wasn't too long and you haven't nodded off !!!
XXXX