I came across these photographs the other day when clearing out a drawer. I told this story before in 2010 so, for the newer readers of HOME, I thought I would recount it once again.
Are you sitting comfortably ? Then I'll begin …..

About 26 years ago, Mr Home and I were invited to Sunday lunch, with our two children, to our good friends beautiful Victorian home. We had been to their home many, many times before and, I loved it, having always lived in period houses myself. A builder had built a whole road of houses in the Victorian era and, he built and lived in the one that our friends lived in so, he had built this one to the highest spec and, with the best of materials, as he was going to live there. When our friends bought the house, it was in disrepair and they had spent much time and money renovating it.
Also coming to lunch were mutual friends from Wales who were staying with us. Well, we all arrived, drinks were served and we all reminisced for a while. Lunch was served and we all sat around their beautifully polished Victorian table to a delicious Sunday roast dinner.
Now, our hostess was pregnant, which was wonderful, as, they had had difficulties conceiving and had been through IVF which had been successful and, they were decorating the nursery. As we had seen the house many times before, our host and hostess took our Welsh friends on a tour of their beautiful home, as they had never been there before. I decided to entertain the children for a while, as I had seen it all many times before. Everyone then enjoyed dessert and, after a few glasses of wine, I went upstairs to the bathroom. The room next to the bathroom was to be the baby's room so I thought that I'd just take a peek at how they were getting on with the decorating and to see what it was going to look like ….. Oh yes …… you know that you all would have done the same !!!! I opened the door and it was pitch black so, I just thought that I would go in a little further and then, the next thing I knew, I was up to my ***** on the floor with my leg hanging through the ceiling and, half of the ceiling was now on the floor in the hall downstairs !!!! They had been doing the electrics and had all of the floorboards up !! ….. and, they had just had the downstairs hall decorated !!!! 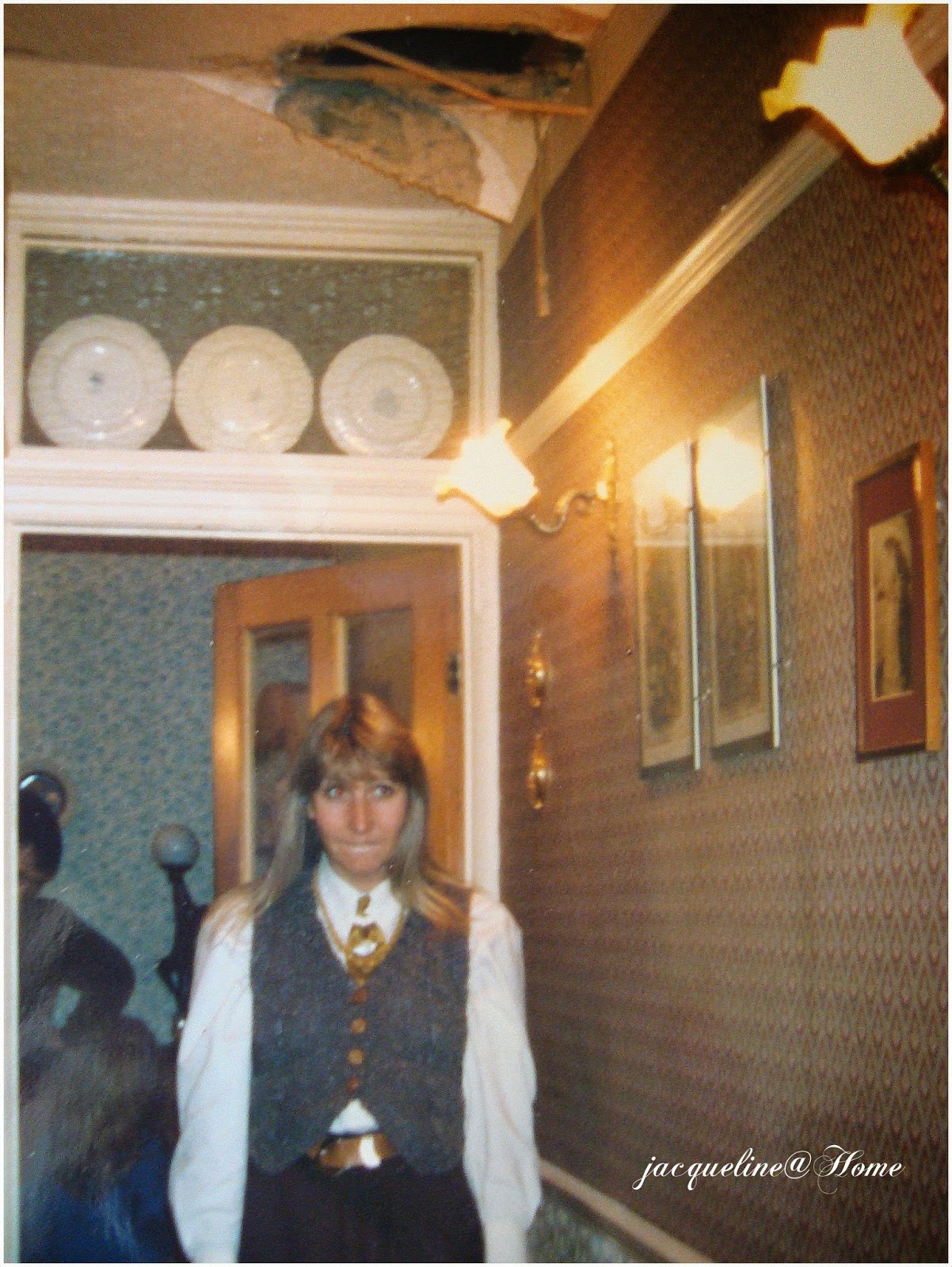 Can you see the tinge of red in my face ? Oh, was I embarrassed. If only I had gone on the tour of the house with the others, I would have known what was going on. 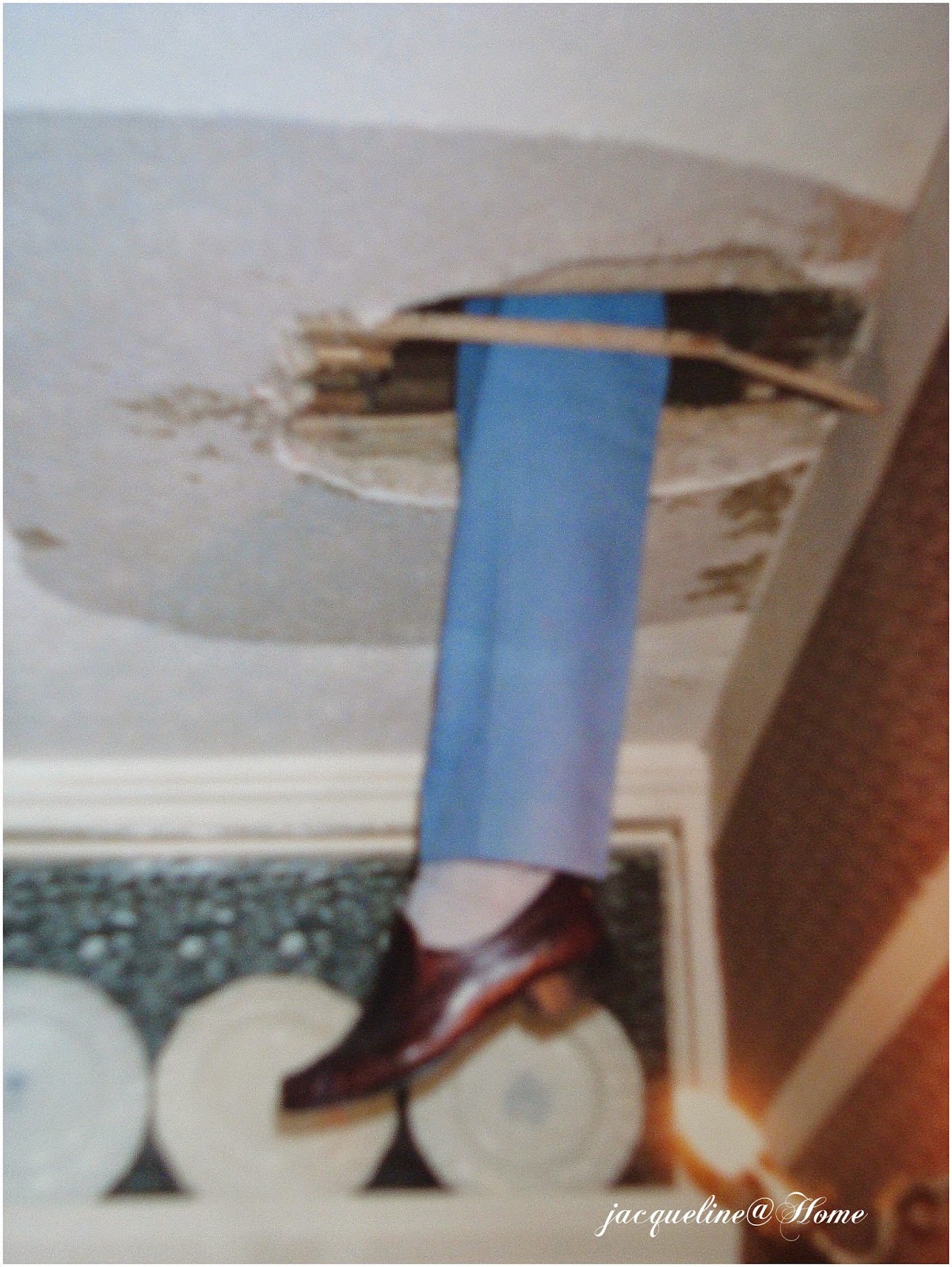 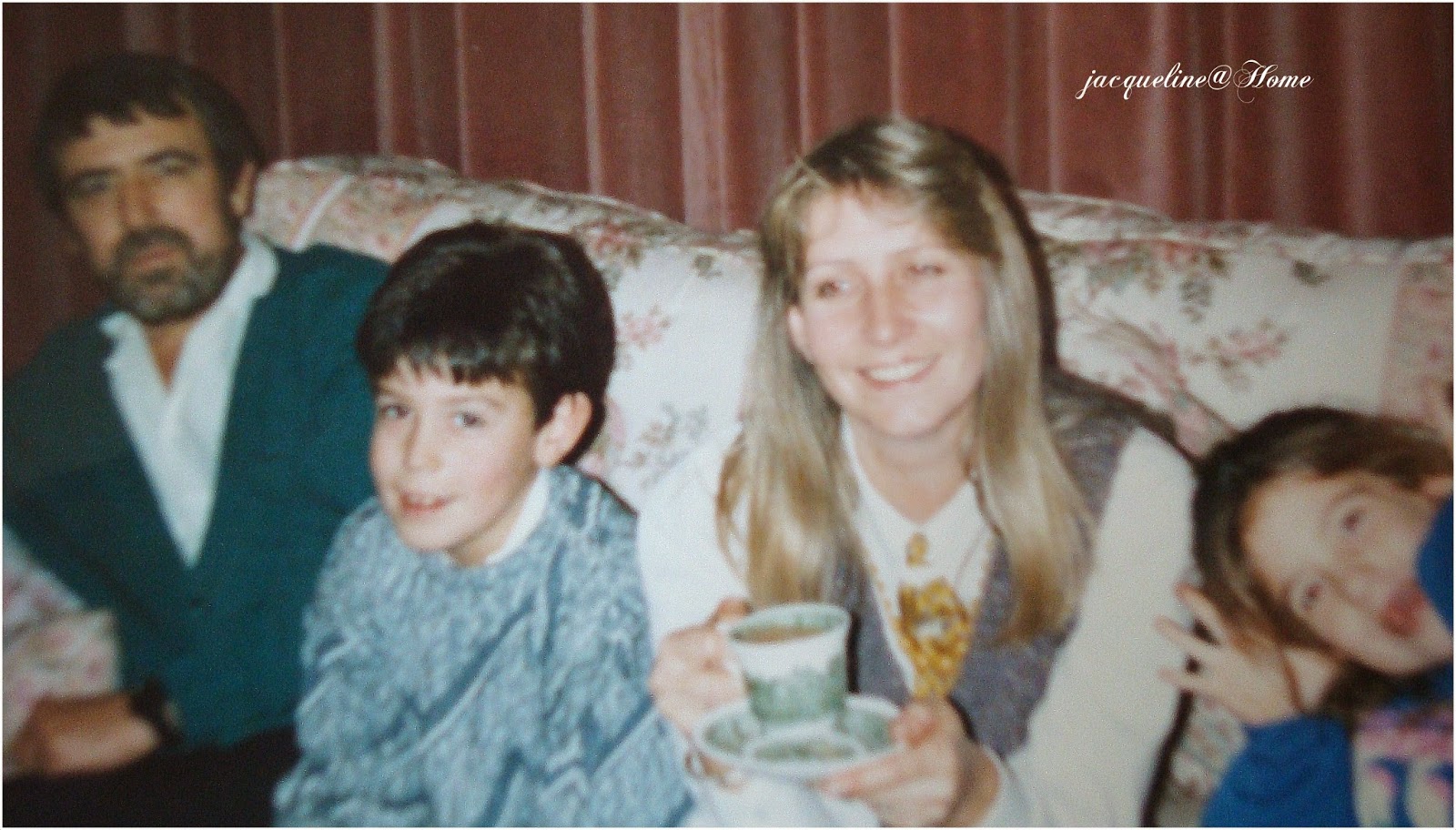 Here we are with a cup of tea after the event, so, they were really good about it and, it is still talked and laughed about 'till this day. Our children are now 35 and 33 so, you can see how long ago it was { and, you can tell by the 80's clothing !! } I had bruises that were black, blue and green for ages ….. and limped a bit for a while. I also didn't have anymore children after that !!!! ha ha !!
As you can see in the photograph, Mr Home is trying to disown me !!

I guess that should have taught me not to be so nosey but, it hasn't !!!!

Our grandchild was over a week late ….. not unusual I hear you say ….. actually, our son was two weeks late and had to be induced, so I know what it's like !!!!
….. and then, her waters broke and our son took our daughter-in-law into hospital. She had wanted a home birth but her blood pressure was high. Her mum { who had been staying with them } and our grandson decided to come over for a couple of hours. Before they left our son and daughter-in-law came home. Her blood pressure was fine so, it was to be a home birth. DIL's mum { who, by the way, is a midwife}  and our grandson came over to us to stay the night, to give son and DIL a private time for the birth ! 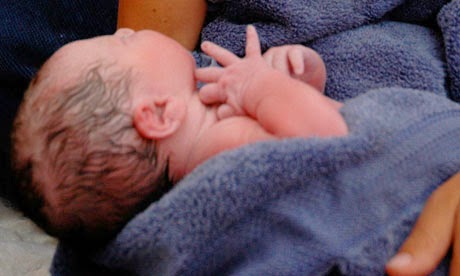 Now at home, they rang for the midwife who immediately set off to their house. Meanwhile, our son was upstairs, getting the birthing pool, thinking that there would be hours to kill, leaving enough time to fill the birthing pool  and to have their baby delivered in a lovely calm, home environment !! Then, our DIL shouted to our son that she had to push and, birthing pool discarded, our son rolled up his sleeves and proceeded to deliver the baby !!!!! Our DIL was very calm and helped our son through the pretty traumatic experience of delivering his own baby { along with a paramedic on the other end of the phone  !!!! } I cannot imagine what that must have been like. I did say to him that it must have been a wonderful experience but he said he wouldn't have quite used that choice of words !!
The midwife arrived after the event !!!! 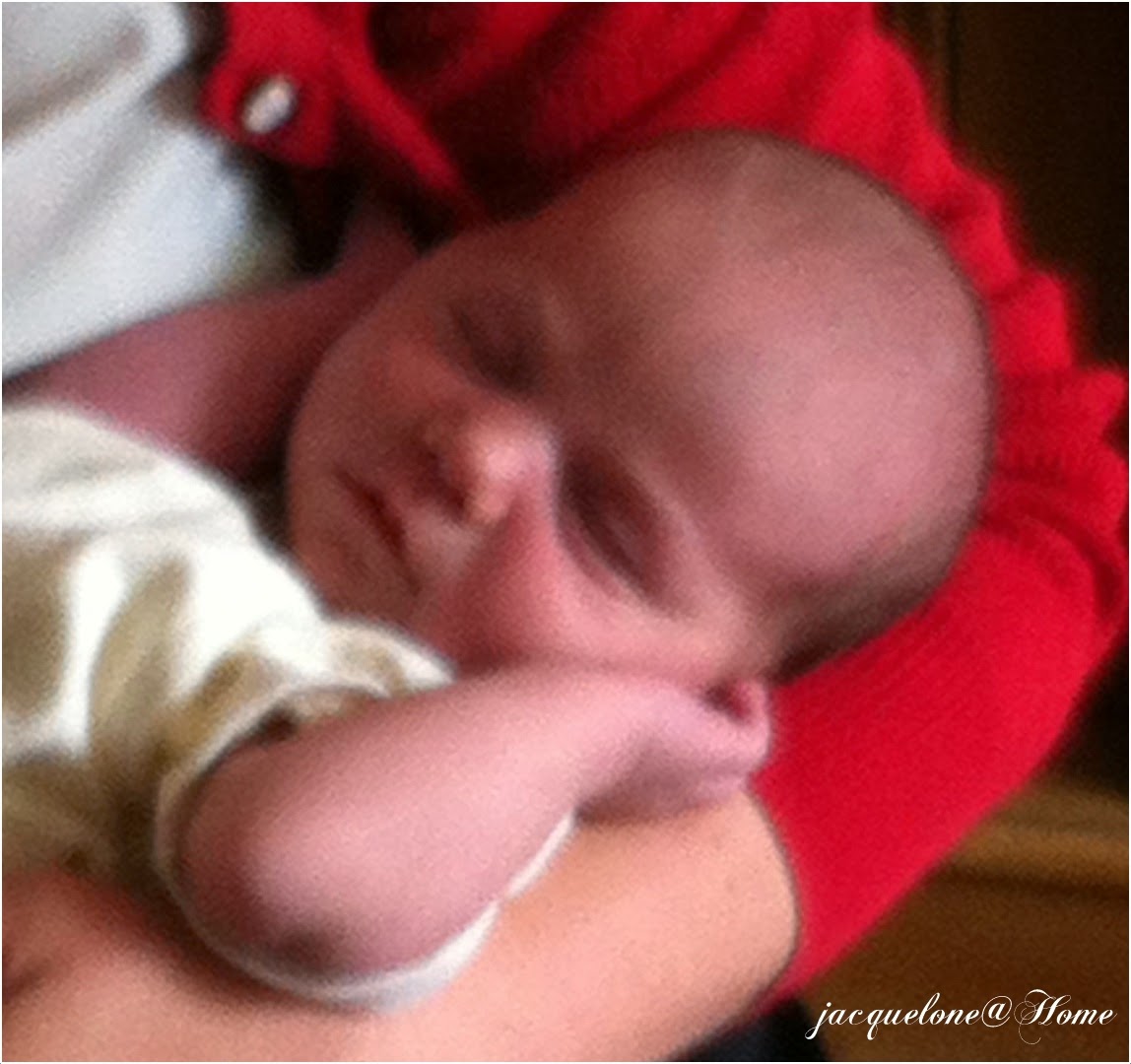 Anyway, Martha Iris, 8lbs 14oz was born and is beautiful. 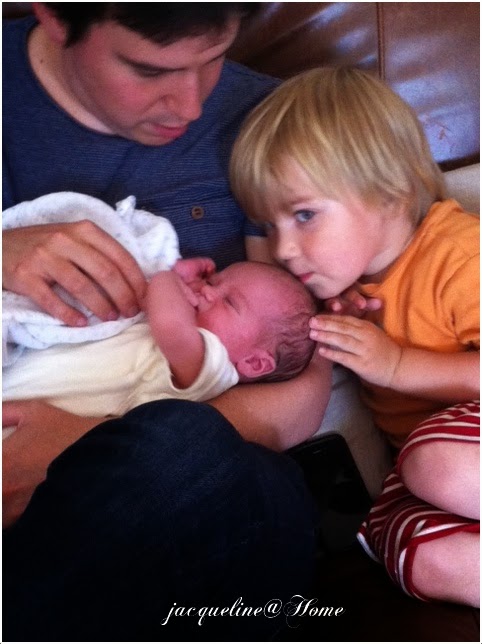 Here she is with her daddy and big brother and is the most wonderful addition to our family.

Welcome to the world Martha my dear !!