Have any of you seen the film HUGO ? It was made in 2011 so it's not new, won Academy Awards and Baftas  and I'm obviously late to the party but I loved it ..... an historical adventure drama film directed and produced by Martin Scorsese. I won't go into a long review but it involves Georges Mélies'  A Trip To The Moon and a boy who lives and winds the clocks at Paris train station. 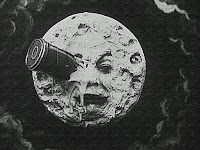 It is a charming film and the music is great as well.