An embarrassing tag, a little poetic licence but funny !!

Hi everyone. I've been tagged by the lovely Kerry @ A Tranquil Townhouse and the wonderful Maggie @ The White Farmhouse and, I was supposed to show the sixth photograph that I ever posted BUT....... it was just a boring old bed from The White Company and would have been very boring Soooooooo .......... and this is where the poetic license bit comes in .......... I have bent the rules, and am posting the sixth photo from my store of pictures.
Now, this photograph was taken some twenty two years ago when, Mr. Home and I were mere slips of things and looked a lot younger than we do now !!!! Just bear that in mind when you look at the photographs and add a few..... I mean lots....of wrinkles to get a picture of what we look like now, although, my hair has been the same all of my life and Mr. Home has always had a beard but it's a little grey now !!!!
Are you all sitting comfortably ?.......... then I'll begin.
Twenty two years ago, Mr. Home and I were invited to Sunday lunch, with our two children, to our good friends beautiful Victorian home. We had been to their home many, many times and I loved it. A builder had built a whole road of houses in Victorian times and, he built and lived in the one that our friend's lived in, so, he had built this one to the highest spec and with the best of materials, as he was going to live there. Also coming to lunch were some mutual friends from Wales, who were staying with us. Well, we all arrived, drinks were served and we all reminisced for a while. Lunch was served, and we all sat around their beautiful, polished Victorian dining table to a delicious Sunday roast dinner. Now, our hostess was pregnant, which was wonderful , as they had had difficulties and had had IVF, which was obviously successful and, they were decorating the nursery. As we had seen the house many times, our host and hostess took our Welsh friends on a tour of the house. I decided to entertain the children for a while, as I had seen it all many times before. Everyone enjoyed dessert and, after lots of wine, I went upstairs to the bathroom. The room next to the bathroom was going to be the baby's room, so I thought that I would just take a peek at how they were getting on with the decorating and see what it was going to look like....... Oh yes, you know that you all would have done the same !!!! I opened the door and it was pitch black, so I just thought that I would go in a bit further, and then, the next thing I knew, I was up to my ***** on the floor with my leg hanging through the ceiling and, half of the ceiling was now on the floor in the hall downstairs !!!! They had been doing the electrics and had all of the floorboards up !!.... AND, they had just had the downstairs hall decorated !! 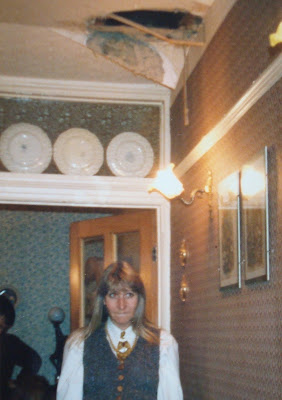 Can you see the tinge of red in my face ? Oh, was I embarrassed. If I had gone on the tour of the house with the other's, I would have known what was going on. 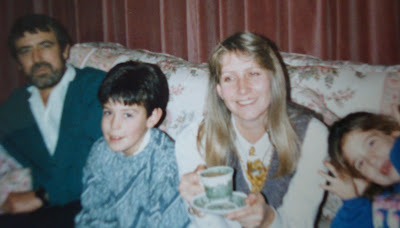 Here we are with a cup of tea after the event, so, they were really good about it and, it is still talked and laughed about 'till this day. Our children are now 30 and 28 so, you can see how long ago it was.I had bruises that were black, blue and green for ages.... and limped a bit, for a while !!!! I also didn't have anymore children after that !!!! haha