Our By Invitation topic for February is ' Do you follow trends when decorating your home ? ' and ' Do you have a look which you repeat often ? ' and was chosen by Penelope Bianchi 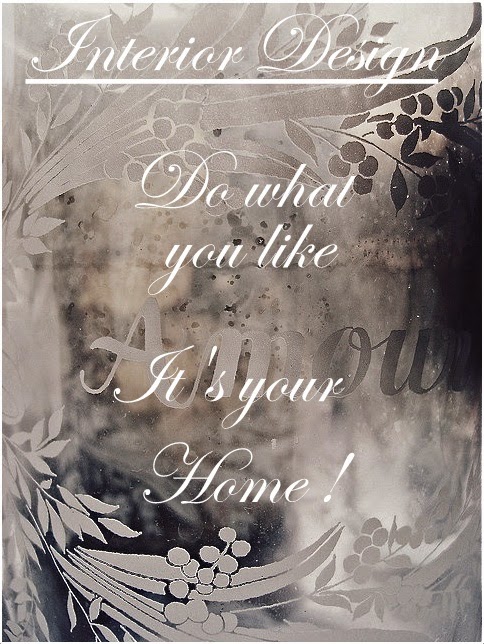 I think that we all follow trends to a certain degree ….. or not …… some people have other interests and their home is a place to eat and to sleep and that is enough.

I have always had an interest in houses, old ones in particular. Our home before the one that we live in now was built in the 1640's. Charles 1st was on the throne and The Great Fire of London was still to come !!  In our deeds it said that anyone could knock on our door and had the right to graze their sheep on our lawn. We were paid £5.00 per year for the inconvenience ….. nobody ever did !! 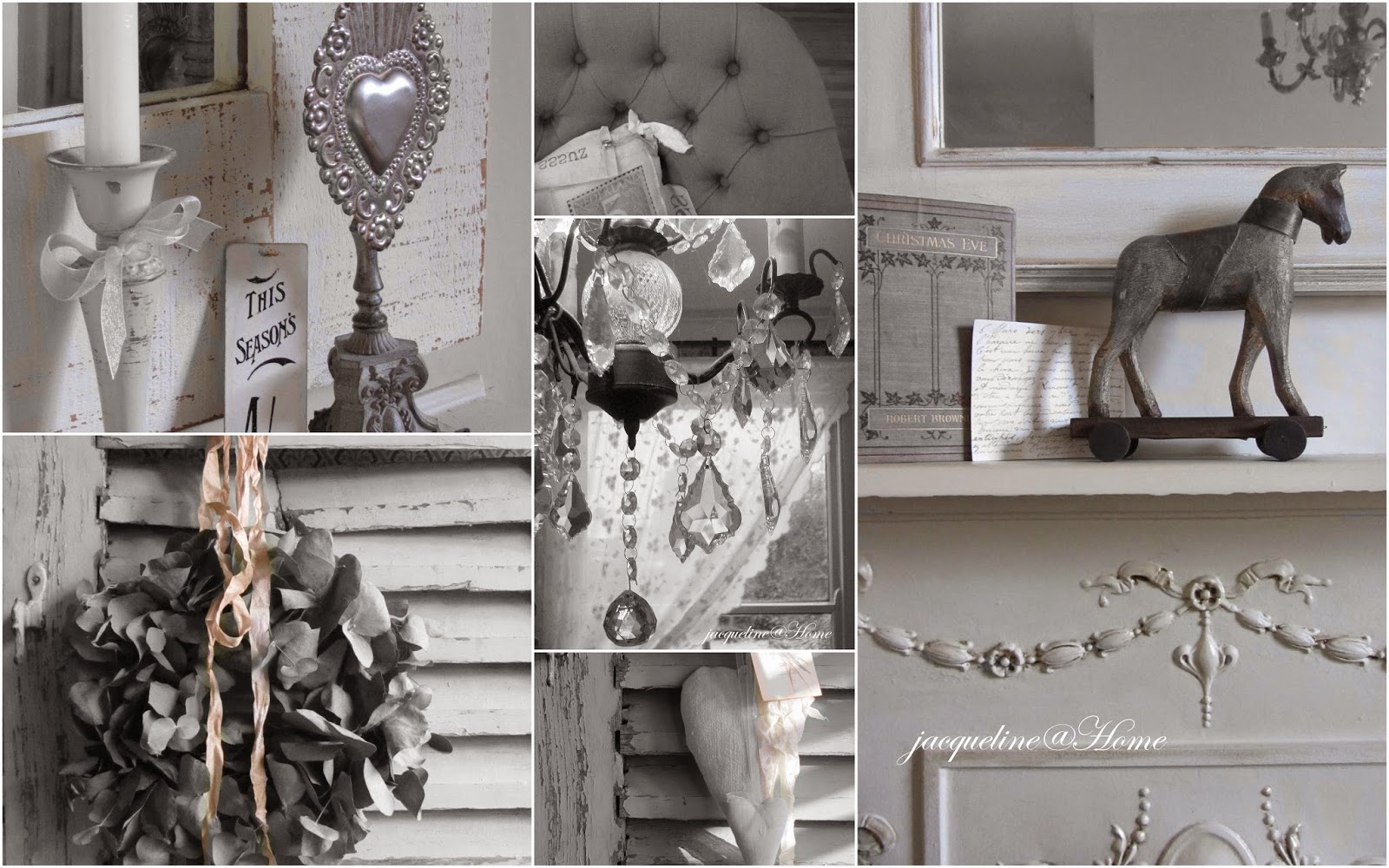 We have lived in our present house for nearly 30 years.
In 1895, a Mr. W, Theatrical Costumier and master hairdresser, built a large house called ' Paradise House ', for himself and his wife Elizabeth. He dabbled in property, purchased houses in the east end of London which he rented out and built a few houses in Hertfordshire , including ours and two others either side. These three detached houses were called ' The Briars ', ' The Ivies ' and ours in the middle ' The Laurels '. ' The Ivies ' fell into disrepair and was knocked down and two houses built in it's place. ' The Briars ' is still there but all original features have been removed over the years although, the present owners are gradually putting them back. Our house however, had many original features remaining. Luckily, no one had removed the fireplaces, the original dresser, the sash windows or the stained glass windows and front door. 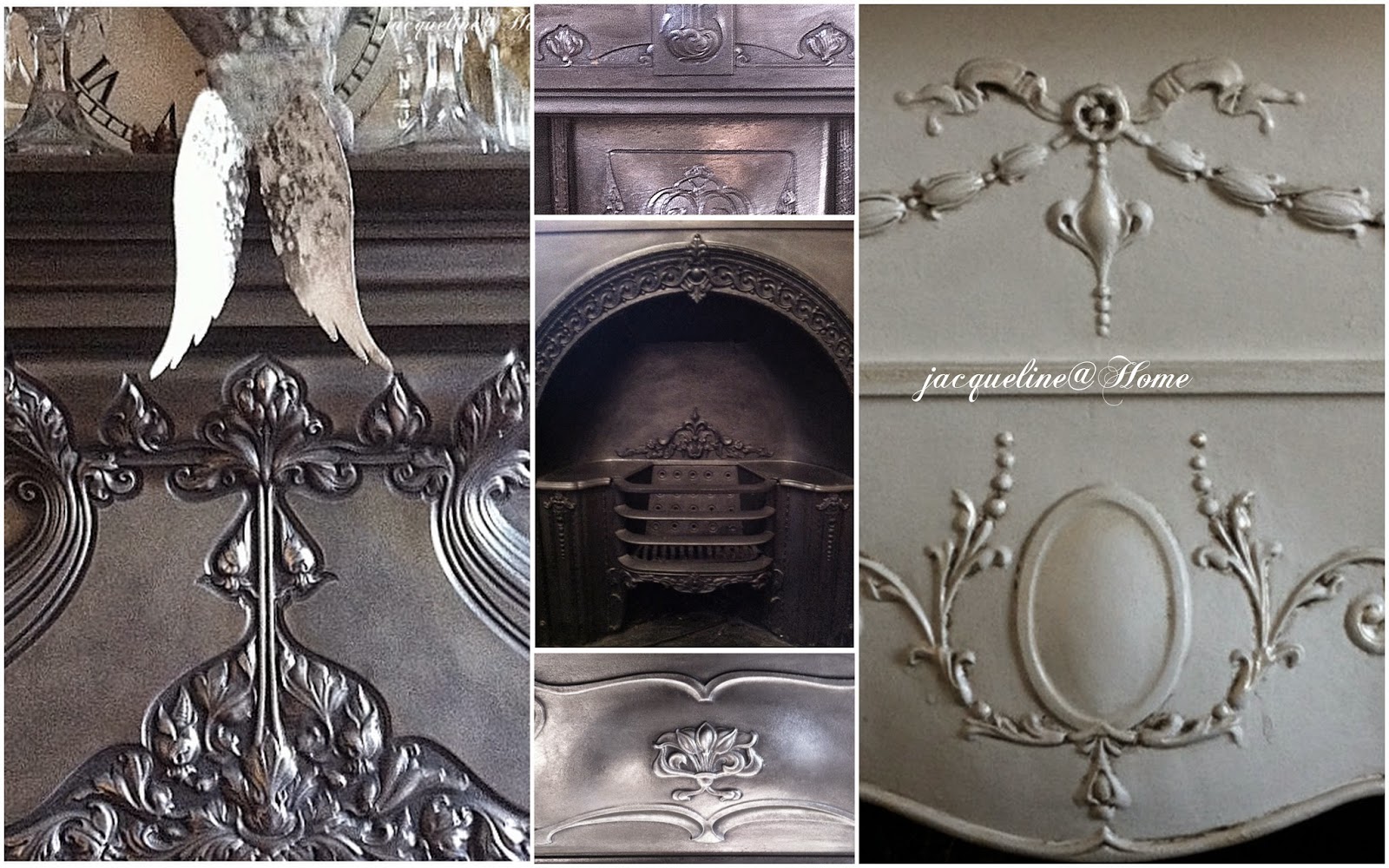 The above are some of the original fireplaces that we have in our home. When houses were being built in late Victorian England, the builder would go down to the ' fireplace shop ' and choose the fireplaces that he liked . Our house was built in 1895. The beginning of the Art Nouveau style started to be recognised in Britain during the 1880's and our Mr. W, being arty and theatrical, obviously favoured  this new Art Nouveau style and, when he popped down to the fireplace shop, he chose, for me, the most wonderful fireplaces.
I just have to say that the arched fireplace in the middle of the photograph is the only one that isn't original. It's a reproduction one and is more Georgian than Victorian but, we like it !! 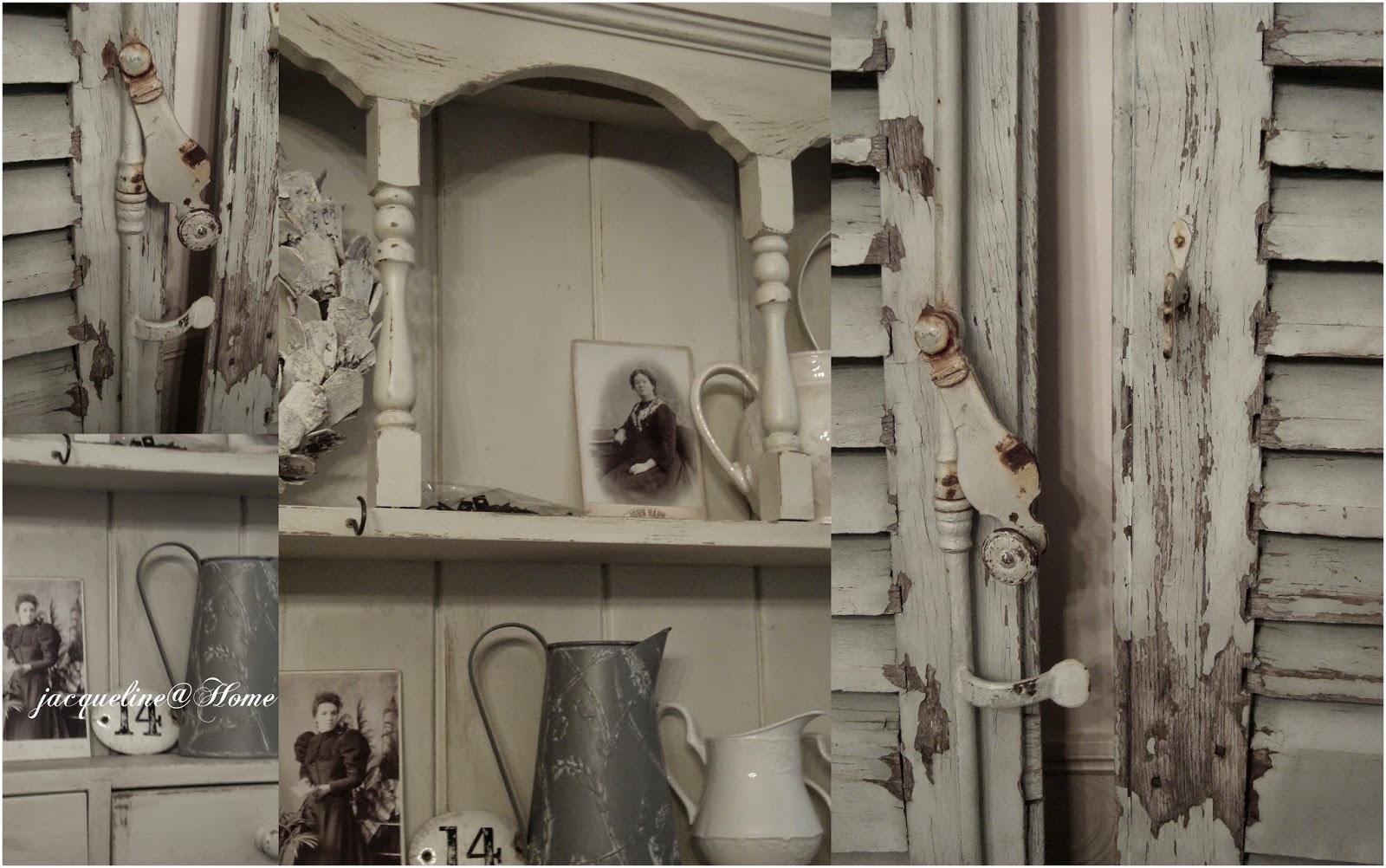 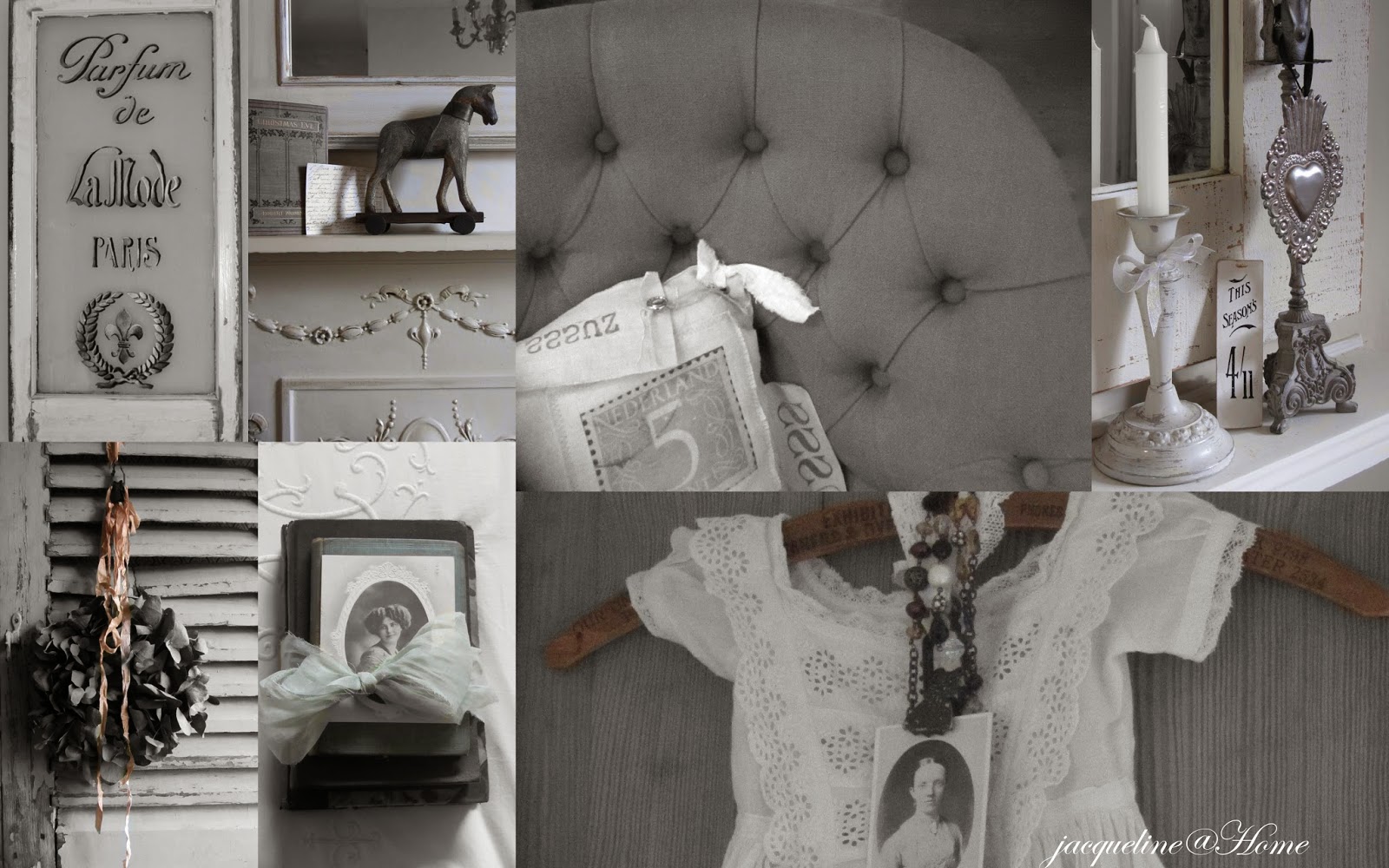 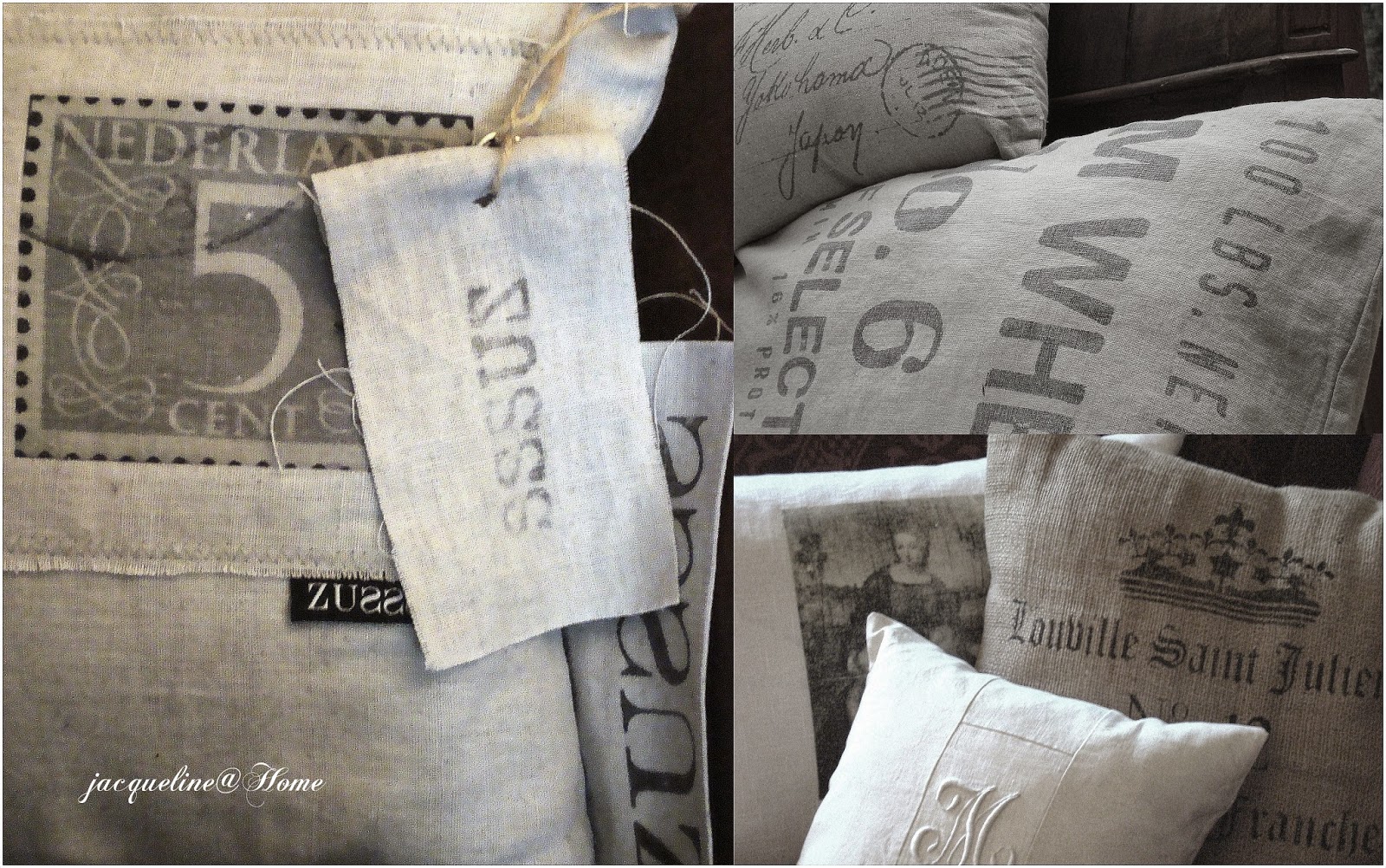 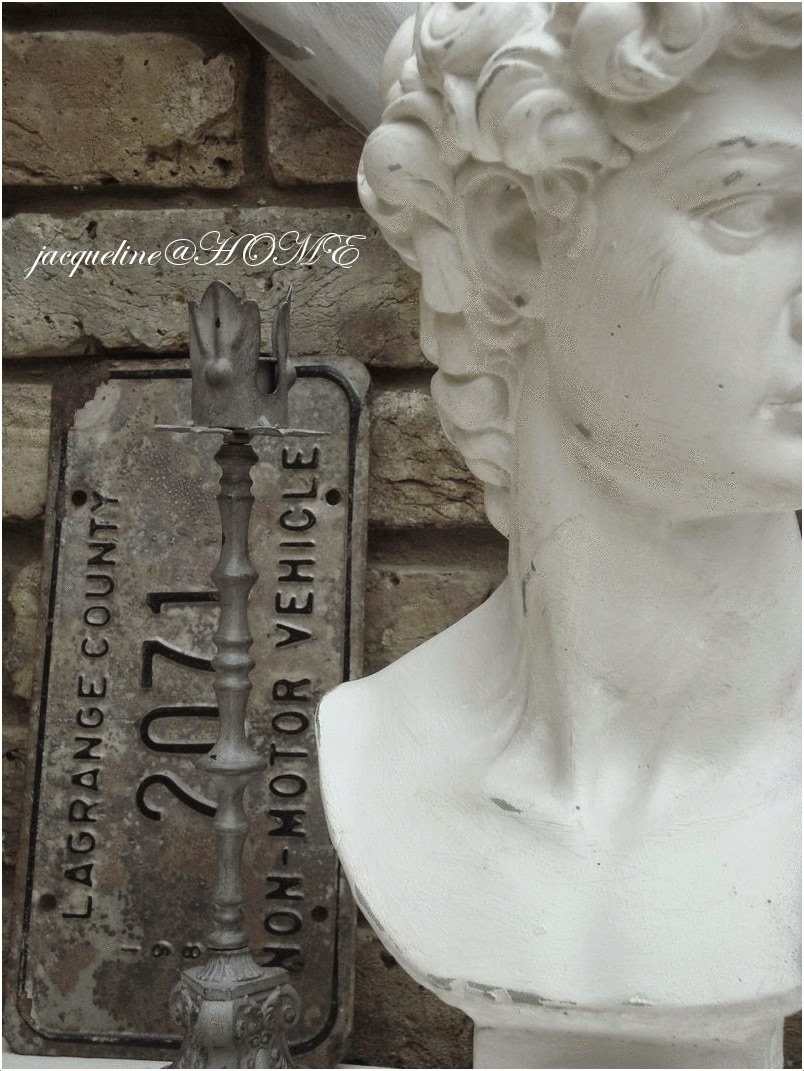 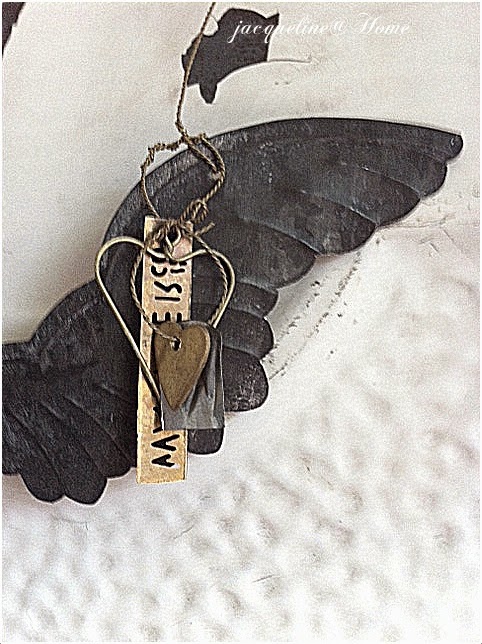 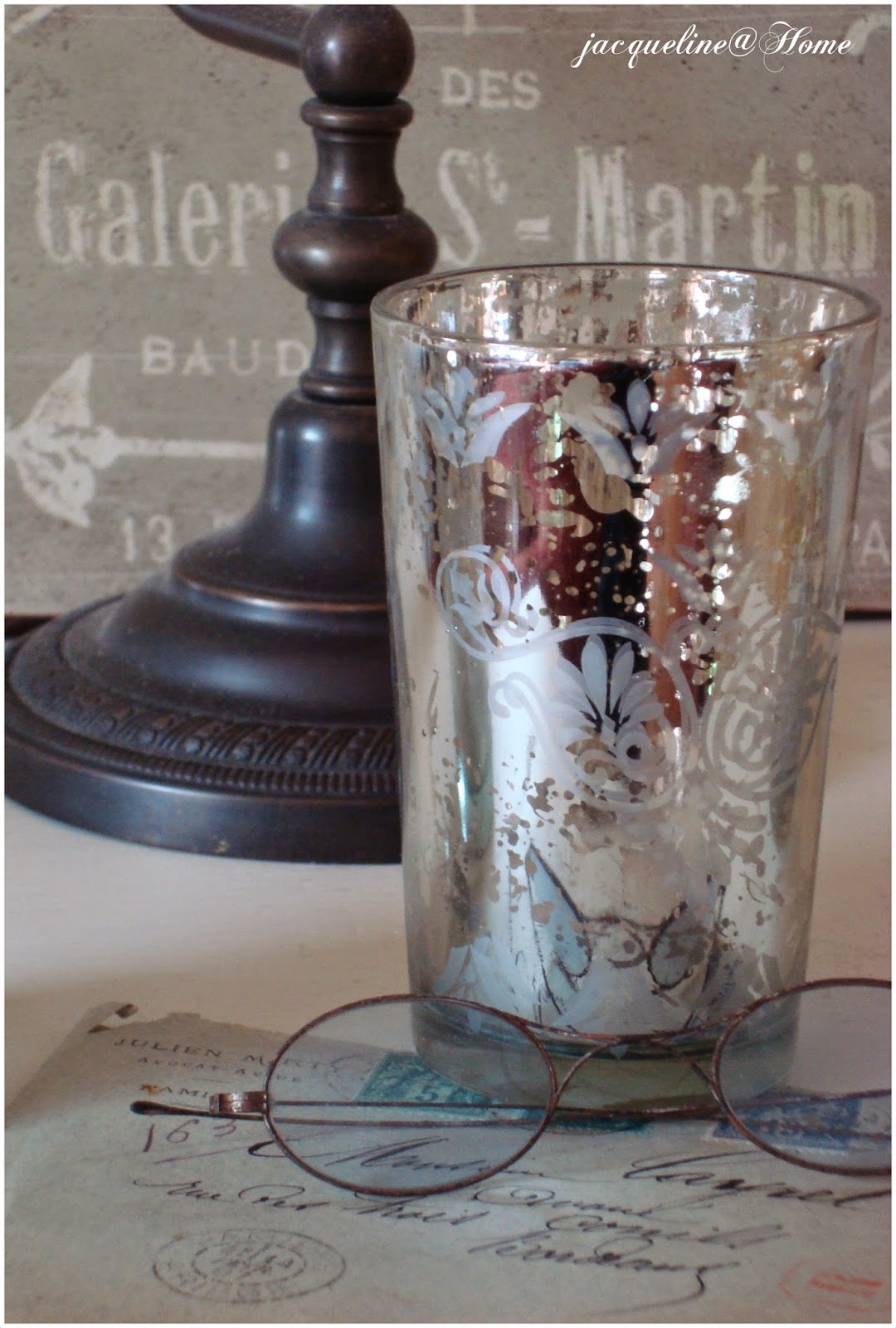 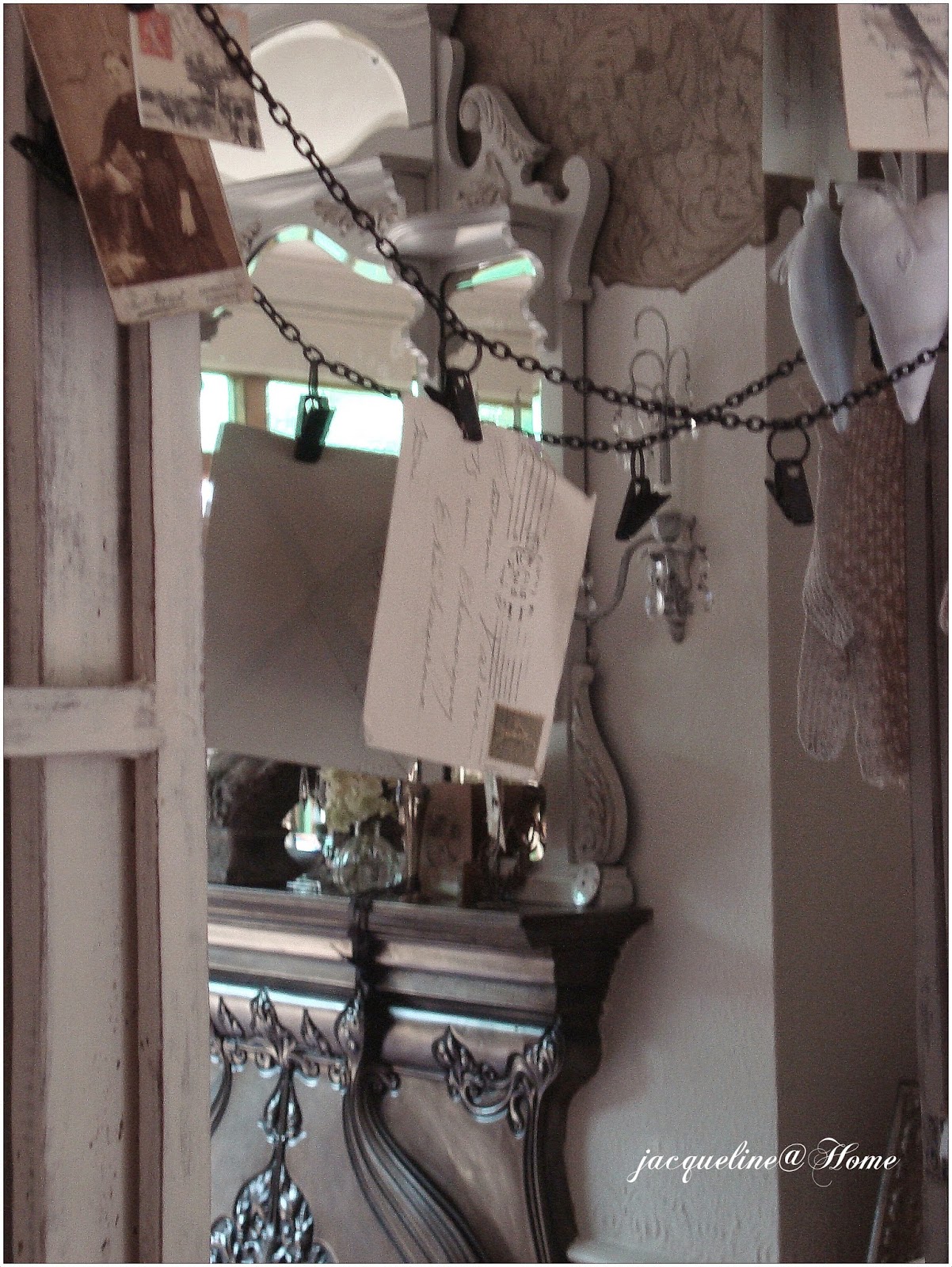 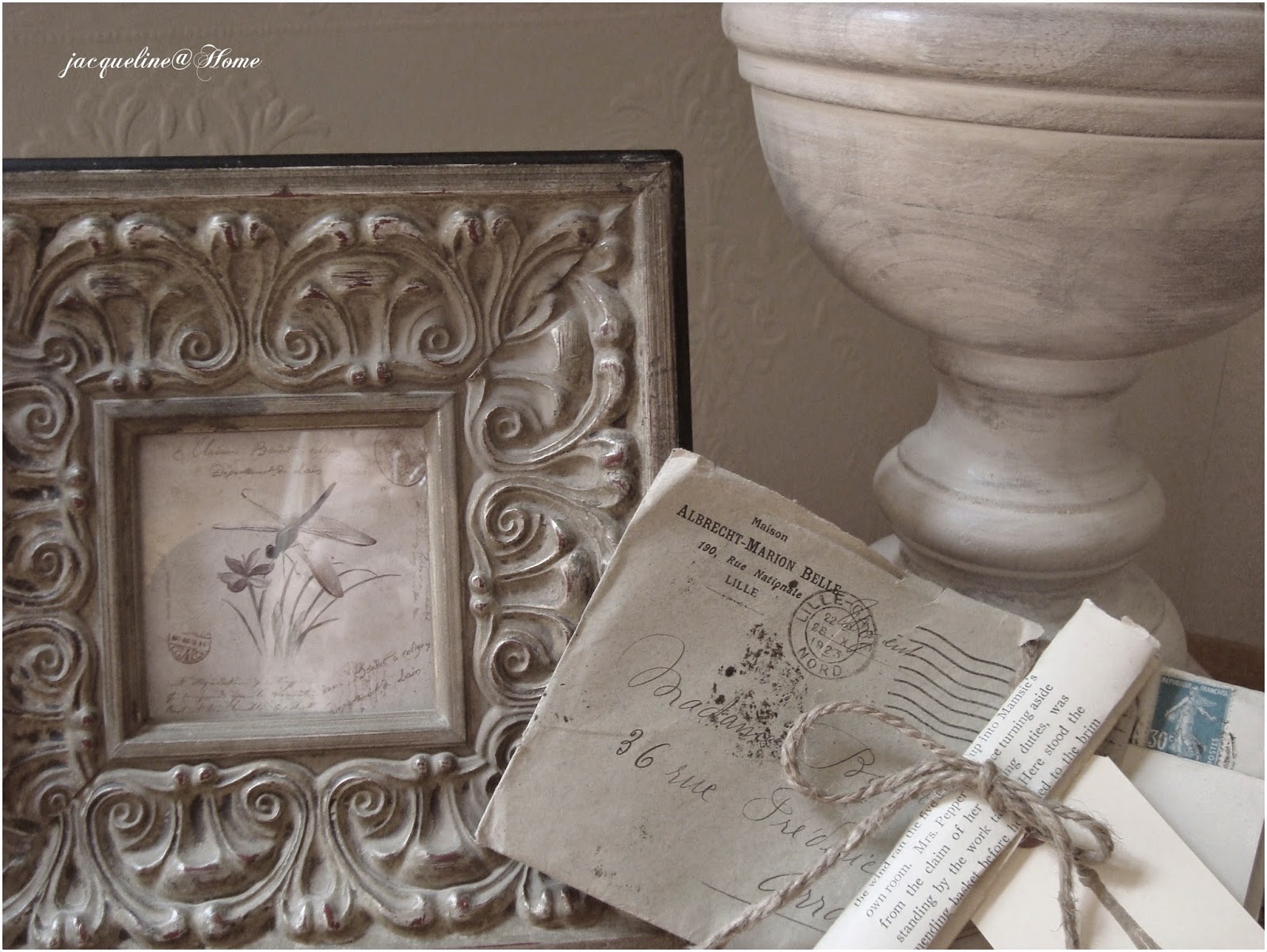 When we moved here in the mid 1980's, Victoriana was the way to go and, our house was a step back in time with festoon blinds, dark colours and Laura Ashley patterned wallpapers. Now, it's the neutral palette of Farrow and Ball, distressed furniture and a Scandinavian feel.
But, to answer the original question, YES, I do repeat the style that I have chosen in all of the rooms. My personal preference is a neutral palette but, a good friend of mine who is an art teacher has colour everywhere and her home is eclectic and beautiful. Each to their own. I love the fact that we are all different ….. it would be pretty boring if everyone's house was the same wouldn't it ? 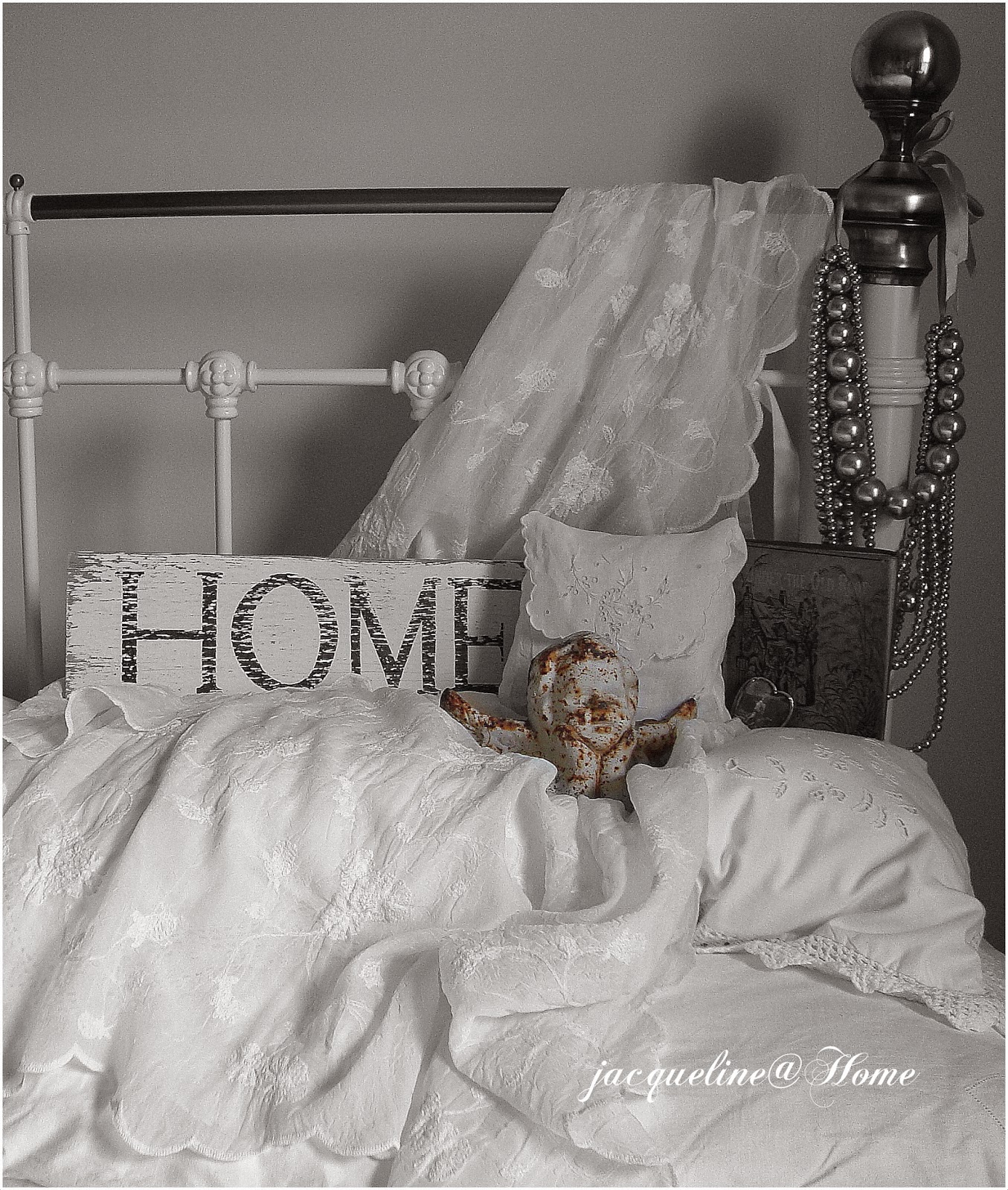 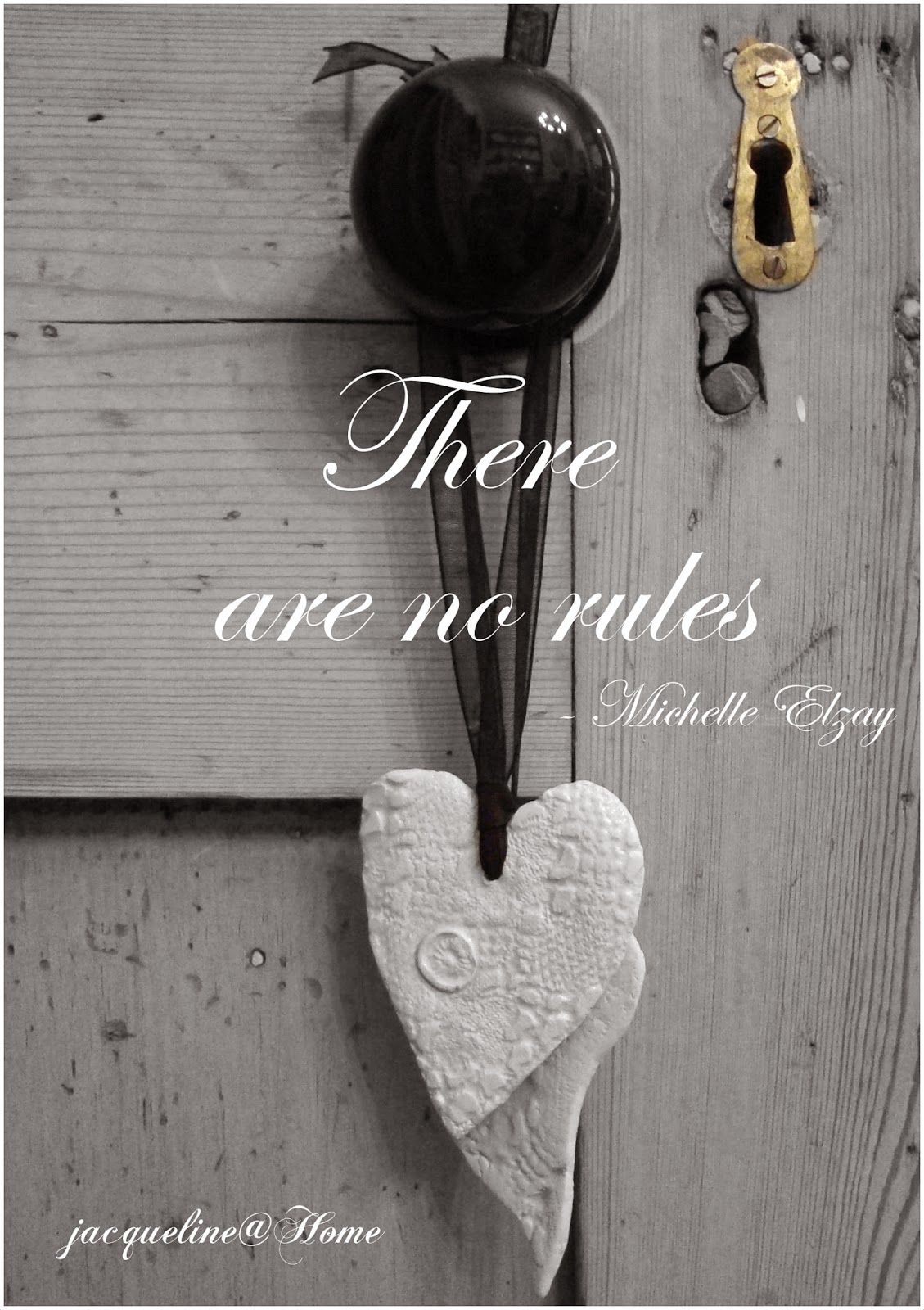 I really don't believe that there are any rules. Everyone should choose what they like and go for it ….. after all, it is your home and you have to live there.
I'm sure that there will be many people who won't like my style and will wonder why I have old French shutters, letters and my Dad's 95 year old christening dress but, I like them !!

To see what other contributors of By Invitation think about interiors and decorating, Marsha has all of the links. 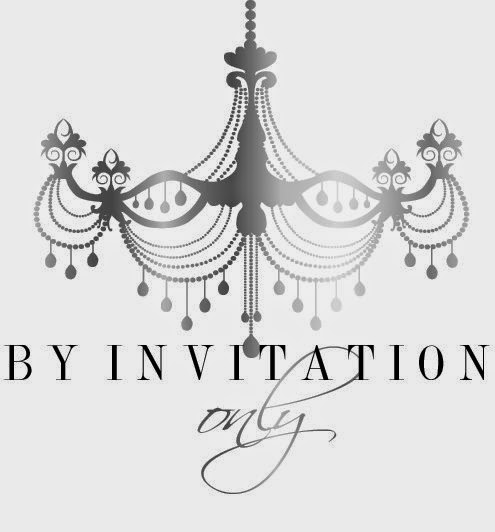 image 1: via la bonne vie but with my words ! All other images via ME !!